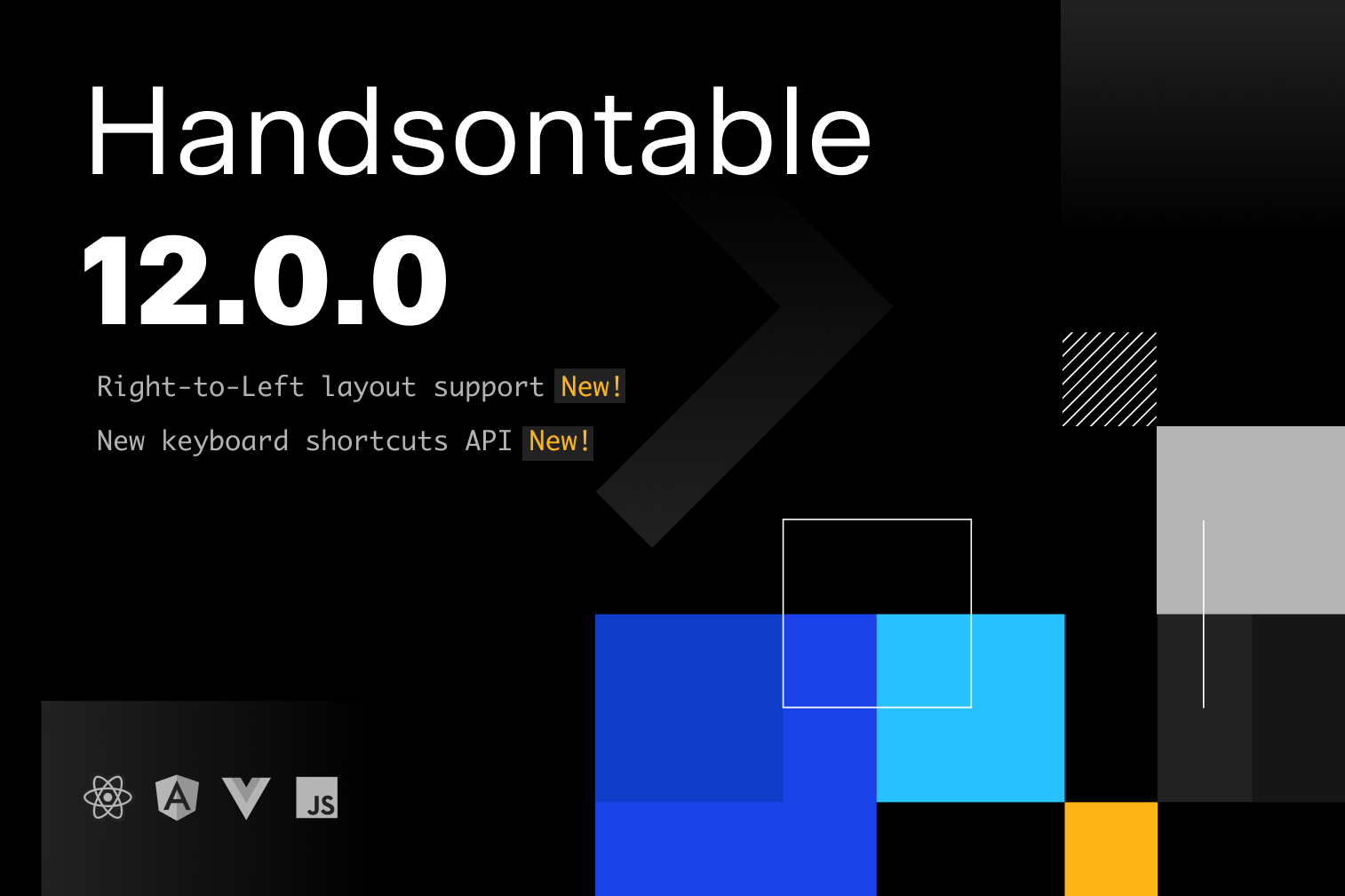 In the versions released so far, we have steadily increased the number of built-in language translations to 16, with the generous help of our user community. These translations have one thing in common: they all use the left-to-right (LTR) text direction, used by most languages in the world.

To make Handsontable a truly global data grid component, this version adds support for the right-to-left (RTL) writing direction. The new feature lets you properly display information in languages such as Arabic, Hebrew, or Persian.

The RTL direction is applied automatically through the inheritance of the dir attribute from the HTML element. You can also control it programmatically, using a new configuration option: layoutDirection.

When the layout direction is set to LTR or RTL, it affects all the relevant elements of the content and the user interface of the data grid, such as:

For consistency with the bidirectionality of layouts, we renamed three of Handsontable’s configuration options. The options that used words left or right in their names, now use words start or end instead. The change is fully backward compatible, so you don’t need to change your code unless you want to use the new layout direction feature.

We are committed to increasing the accessibility of Handsontable and your apps built upon it. The ability to perform actions using a keyboard plays an important role in content accessibility guidelines.

In Handsontable 12.0.0, we introduce ShortcutManager – a brand-new API dedicated to the management of keyboard shortcuts. It contains simple-to-use methods that let you add or remove keyboard shortcuts within a particular UI context. You can also register a new context for your custom plugin or editor.

You can manage keyboard shortcuts by contexts and groups. Thanks to that, actions that are bound to certain keys can be easily scoped to grid navigation, editors, or plugins. An action can also be explicitly scheduled to run before another action, identified by a group name.

We made this change in a backward-compatible way. The ShortcutManager API is now the recommended way of managing keyboard shortcuts, but if your app already does that through the beforeKeyDown and afterDocumentKeyDown hooks, it can continue to do so. However, we’re marking one potentially breaking change for these hooks: we corrected the order of their execution. If you are using any of them, please retest your app for regressions regarding keyboard navigation, even though there shouldn’t be any. In case of any problems, contact our support.

The new underlying infrastructure explained above has allowed us to improve the Handsontable’s default shortcuts to:

Try using Handsontable 12.0 with a keyboard, and you’ll see the difference straight away: navigating the grid is more intuitive, more predictable, and more similar to the most popular spreadsheet software on the market.

A consistency fix for updateSettings()

This is an important improvement, especially for apps using Handsontable’s framework wrappers (for Angular, React, Vue 2, and Vue 3). The fix improves the grid’s performance and removes glitches caused by state resetting when the Handsontable instance was controlled through a state manager.

However, if your app relies on the fact that updateSettings() resets the states, now you need to reset the states explicitly by calling loadData(). To learn about the exact scope of changes, see the migration guide.

Releasing Handsontable 8.0.0 in August 2020, we announced our plans to drop support for Internet Explorer 11 in the future.

In the meantime, Microsoft announced retiring both Internet Explorer 11 and Edge Legacy (the non-Chromium version of Edge).

Now it’s time for us: starting with version 12.0.0, the Handsontable data grid works only with modern browsers and no longer supports Internet Explorer 11 and Edge Legacy.

To help those of our customers who have to support these browsers in their apps, Handsontable version 11.x becomes the long-term support (LTS) version for Internet Explorer 11 and Edge Legacy. We will continue fixing critical bugs until the end of 2023. If you’re affected by this change, contact our support team to learn more.

In reaction to a security vulnerability that was found recently in Moment.js versions lower than 2.29.2, we upgraded Handsontable’s Moment.js dependency to 2.29.3.

It’s important to note that the vulnerability didn’t affect Handsontable when it’s used (as intended) in a web browser, but we upgraded the dependency anyway.

In fact, this change comes with a side benefit: it allowed us to improve the way Handsontable matches dates with date formats in certain cases.

Handsontable 12.0.0 brings some bug fixes as well. For example:

Release notes: what we removed

You can find detailed release notes for this and previous Handsontable versions here.