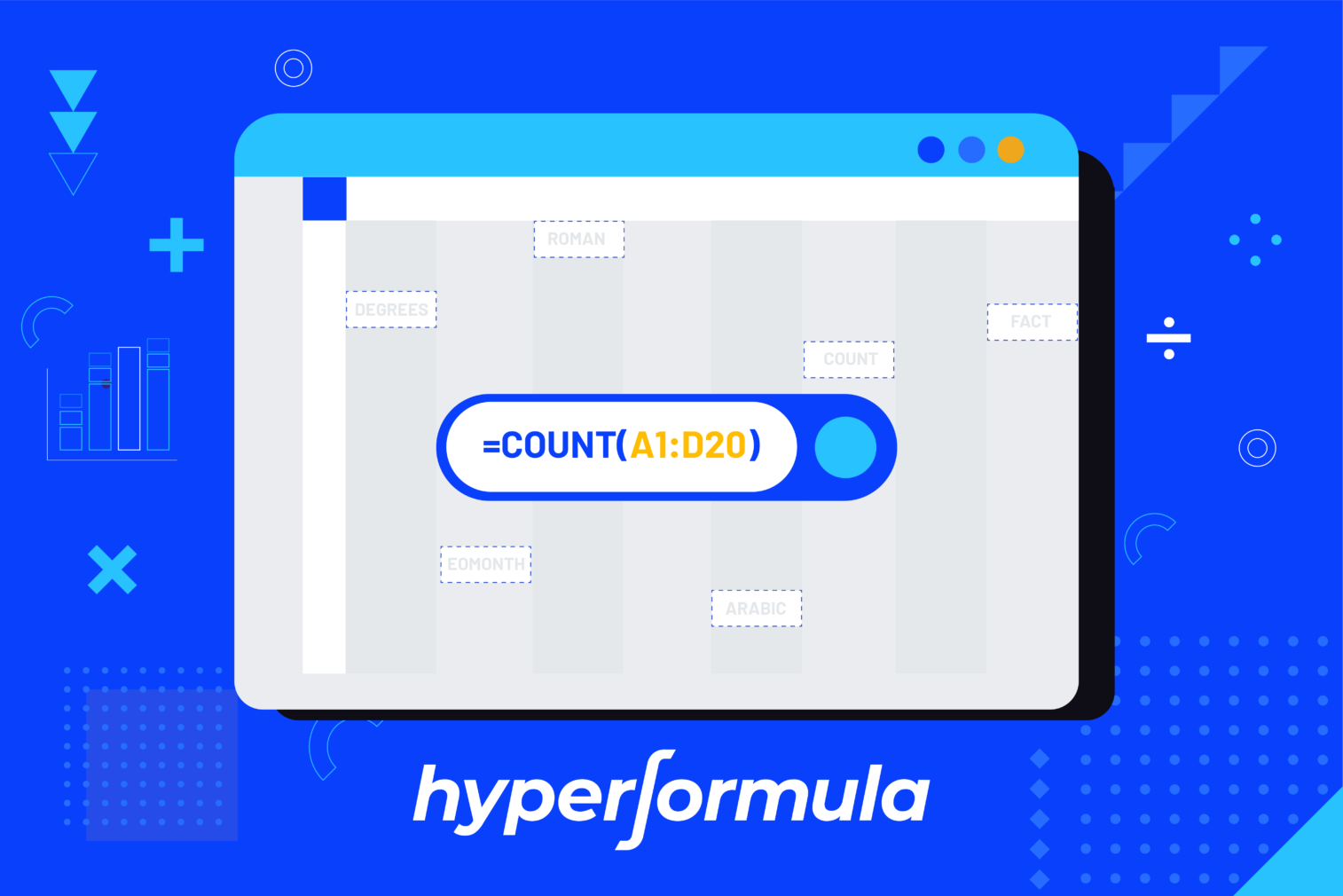 If you try to combine features of a full-grown calculation engine with the flexibility of modern-day JavaScript, you may end up developing… HyperFormula.

A huge library of functions

Looking back, even we at Handsontable are quite amazed to see how large the library of supported functions has grown. We currently stopped at 389 functions, in 16 languages. But, who knows, the number may still go up.

Most likely, you’ll never need all of those functions at once. But, there’s a high chance that HyperFormula supports exactly those few Excel functions that will save you eons of time when building your app.

For the full list of all supported functions, check the HyperFormula documentation. To get a quick glimpse of what HyperFormula has to offer—read on.

Note: HyperFormula is a headless engine (it doesn’t confine you to any specific UI), but we’ll employ an impromptu UI structure to help you imagine what those functions may work like for your end users.

Among the nearly 50 of HyperFormula’s engineering functions, some are dedicated to converting binary numbers to decimals, octals, and hexadecimals.

For example, to convert a binary number to a decimal, you can use the BIN2DEC function, the same way you’d do it in Excel or Google Sheets: BIN2DEC(binary_number).

Similarly to BIN2DEC, you can use a whole bunch of other functions to convert numbers from and into the binary notation:

So, you can easily convert number notations—what about units?

Let’s take measuring angles. Ever heard of Excel’s RADIANS and DEGREES functions? They’re in HyperFormula, too:

Speaking of conversions, there’s a neat pair of Excel functions that lets you convert roman numbers into arabic numbers, and vice versa. Quite intuitively, they’re called ROMAN and ARABIC. In case you wondered, HyperFormula has got that covered, too:

Another function that doesn’t lack fans among Excel or Google Sheets users is EOMONTH. Again, HyperFormula reconstructs that function in JavaScript, and lets you tweak it whatever way you like.

By default, EOMONTH calculates the last day of the month that comes a number of months after (or before) the date of your choice:

For example, to calculate the last day of the month that will come 10 months from now, you can use: =EOMONTH(NOW(),10).

As in Excel, the default output of EOMONTH is a serial number (a number of days passed since January 1, 1900). And, as in Excel, you can easily convert it to a human-readable date, thanks to functions such as DAY, MONTH, or YEAR.

If your end users are into computing factorials, HyperFormula lets you use the two Excel factorial functions, FACT and FACTDOUBLE:

As the names suggest, FACT calculates a given number’s factorial, and FACTDOUBLE calculates its double factorial:

HyperFormula supports more than 130 Excel functions related to statistics. Among them, you’ll find a group of simple yet frequently-used functions that help you see what’s what in a large pool of data. The most basic one of them is COUNTA.

As you can imagine, it’s a perfect match for HyperFormula’s array features:

You can also do the opposite: count how many cells in your set are empty. Just use the COUNTBLANK function—you’ll find it in HyperFormula as well:

Now, a similar function called COUNT also gives you a count of values in a given area, but it focuses solely on numbers. It counts how many numbers (as opposed to other types of values) are in a given set of values:

COUNTIF takes a set of values, and counts how many values in that set match your custom criteria: COUNTIF(range_of_values; criteria).

But that’s not all: COUNTIFS, the Excel function that can apply multiple criteria to multiple sets of values is supported in HyperFormula as well: =COUNTIFS(Range1; Criterion1 [; Range2; Criterion2 [; ...]])

There’s a simple Excel function that helps you count how many working days there are between two dates. It’s called NETWORKDAYS, and you’ll find it in HyperFormula as well:

NETWORKDAYS lets you specify custom holidays as well, for example:

But there’s more: HyperFormula supports NETWORKDAYS.INTL, which lets you set your own definition of a working day (for example, you can set Sunday as a working day, and Friday as a weekend day).

Another simple Excel function that often comes in handy is SUMPRODUCT. It takes arrays of values (as many as you like), multiplies those arrays’ corresponding values, and sums up the products of those multiplications.

One function to rule them all

Now, if you’re building an advanced business app, there’s always a chance that this one particular Excel function that you need badly is missing from HyperFormula’s huge library. Or, it may even turn out that your end users’ needs are so specific that they can’t be met by any existing function. What then?

But your ultimate weapon is creating your own custom function from scratch. HyperFormula lets you easily create functions that do exactly what you need them to. You can even add your own translations for them. In short, the sky is the limit.

Of course, the functions we mentioned in this article are just a tiny sample of what HyperFormula has to offer. In the near future, we’re going to devote some more blog posts to other Excel functions that HyperFormula supports—stay tuned!