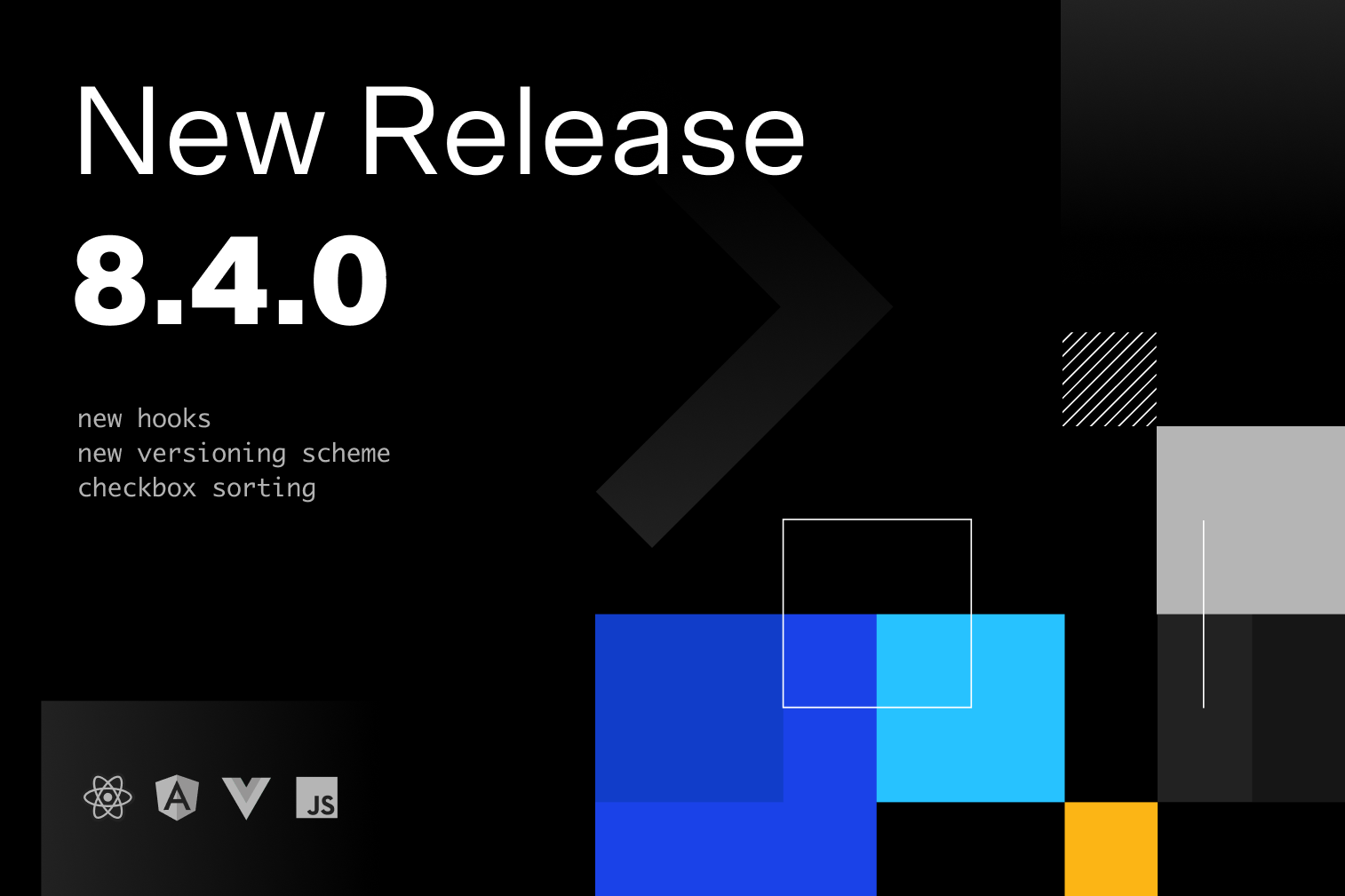 The new release of Handsontable has arrived and it brings lots of bug fixes as well as new hooks, and a new versioning scheme.

Handsontable follows the semVer versioning strategy, which proves to be predictable and self-explanatory for developers working with Handsontable. However, until now we have been releasing our wrappers for frameworks in separation from the core library, resulting in four different versions of the software. We noticed that it was confusing for some developers, especially for those writing applications in one of the supported frameworks.

With the 8.4.0 release, we changed the versioning scheme by unifying all package version numbers. There will be only one Handsontable version from now. We believe this is a huge improvement to the way how we inform you about the updates to the software, regardless of your technology preferences.

Obviously, each consecutive release will respect the semVer rules.

Here you have a comparison between the previous and the new versioning strategy.

We added new hooks to solve issue #6948 reported on GitHub. A detailed explanation of the solution can be found in this PR. The new hooks are listed below:

You can use new hooks to react to changes in the stack of undo/redo items. For example it is useful when you create a spreadsheet-like toolbar and want to grey out the “Undo” icon (⬅) when there are no actions left in the undo stack.

Improvements to the Nested Header plugin

With the “Nested Header” plugin you can group columns by adding multiple levels of headers. This feature is useful when you have data that belong to various categories – for example, the data in the column ”Full name” (level 1) could be presented as part of the categories: “Employee data” (first group), and “Company A” (second group).

Previously, a bug caused a serious misalignment of headers whenever you hid one or more columns within the nested headers structure. This issue is now fixed, but we’re still working on making it possible for you to collapse and expand such columns using the grid’s UI. We expect that this problem will be fixed soon and released within one of the future versions.

Minor improvements to the mobile experience

To improve your experience on mobile devices we fixed an issue that made it difficult to open the cell editor when tapping twice on it (#6961). We also noticed that some users couldn’t open the dropdown menu (column menu) on Android devices (#6212). That’s fixed now too.