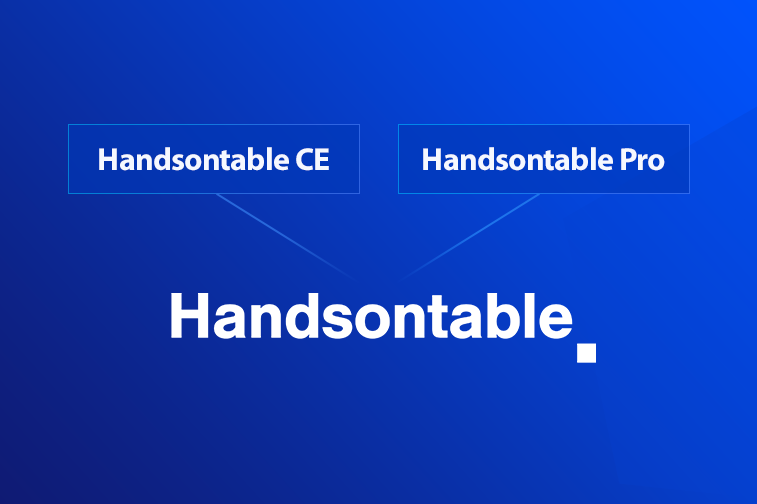 Recently, we had a long and heated internal discussion about the licensing model of Handsontable. We’ve noticed that building a sustainable business based on an open source licensed software has become much harder. At the same time, we’re observing increasing competition in the developer tools market. It is far more competitive than it was when we started this project back in 2011. Taking that into account, in order to ensure its longevity, we made a decision to change the way we distribute Handsontable.

Here is a summary of the changes that take effect starting with version 7.0.0, which is being released on March 6, 2019:

This is a significant change for all of us. Let us explain the reasoning behind this decision.

Our reasons behind the change

Being able to see how Handsontable has grown over the last 8 years makes us proud. Each day, thousands of developers use it to add better data management capabilities to their apps. Countless commercial and open source projects depend on Handsontable.

However, it never developed all the traits of an authentic open source project. In an ideal world, it would gather a community of people collaborating and sharing ideas over a common goal. In such a situation you would expect the open source project to sustain itself with the help of the community. However, this wasn’t the case with Handsontable CE. Essentially, it was kept running thanks to the money earned from Handsontable Pro. Unfortunately, our observation is that the ratio of commercial to free users is about 1 to 25. That doesn’t pay the bills. Hence, the only way for us to invest more in the product is to convert more free users into paying.

We want to grow as a company whose sole mission is to continuously improve Handsontable. We have an ambitious roadmap and a passionate team. What we need is a more balanced business model that will support our long-term goals.

The new, custom-written license is for everyone using Handsontable for non-commercial purposes. Our intention is to provide free software especially to:

On the technical side, except for the license, nothing changes in terms of the availability and openness of Handsontable. It stays on GitHub and we will review pull requests when they appear.

However, we understand that you may not be able to use the new license. In such a case, you can purchase a commercial license or stay with Handsontable 6.2.2.

The decision announced today will allow us to focus better on the development of the product. We are securing reasonable funding for the company by making sure that commercial products are be based on a commercial version of Handsontable. It is important for us to sustain the company for the long-term. We are excited to see what the future holds for us!

Change is the essential process of all existence.
– Spock, Star Trek

We believe in the power of authentic open source projects. We know that Handsontable wouldn’t have existed without open source libraries created by passionate developers. That is why we are excited to announce that we will be giving 1% of our monthly net profit back to open source creators. We haven’t yet decided which project to support, but we will let you know about it soon! If you have any suggestions, please tweet them to us.

Handsontable is developed and maintained by Handsoncode, now a 14-person company which was founded by Marcin Warpechowski and Chris Spilka in 2015 in Gdynia, a charming city in northern Poland.

We are very thankful to all of our contributors, users, and customers. We are opening the second chapter in Handsontable’s history, but we know that this is only possible because of you, the people who’ve written the first chapter with us.