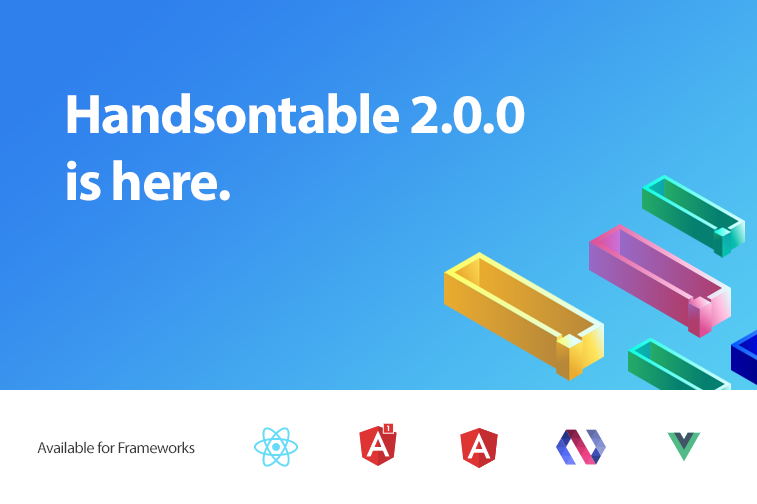 We are happy to announce that Handsontable (CE/Pro) 2.0.0 is finally here. It’s hard to believe that it took us 6 years to bump the major version of our best-selling software. It’s a small step for mankind, but one giant leap for our team.

Handsontable is a long-run project, with many projects heavily depending on it. That makes us responsible for keeping these projects running smoothly by providing a reliable and semantic versioning. We believe that this can be achieved by applying the rules outlined in Semantic Versioning Specification (SemVer).

If you are not familiar with SemVer, then read the summary below. It briefly explains how SemVer defines the version numbers that are incremented during each release.

The key advantage of SemVer is that it is predictable. If you set a version range allowed for a specific dependency, you can be sure that it won’t be bumped without your control and consent. This makes the development much more comfortable, but requires being more attentive about the latest news and upgrades. For Handsontable, you can always find them on our Blog and Twitter.

We live in the world of npm, Yarn and other package management systems. It means that more and more apps rely on what has been specified in the dependencies object. Obviously, being SemVer-compatible makes Handsontable much more developer-friendly.

But there are more reasons we decided to bump Handsontable:

I want to make it clear: This Handsontable 2.0.0 release is a purely technical update. We haven’t added any new features or made any significant changes to the API.

This change was long awaited and we didn’t see any reason for delaying it any longer. I think we chose a moment as good as any.

Plans for the future

In the upcoming releases, between May and July, we will be moving towards a single repository holding both open source and commercial plugins. It’s a licensing nightmare, but we’re on the right track to figure it out.

We also hope that the new documentation will be more friendly for developers coding in React, Vue, Angular and Polymer.